A DAY TRIP TO KASTELLORIZO
20 minutes away from Kas there is one of the smallest but cozy islands in Greece.
Home Activities Greek Beauty Next Door: Kastellorizo
0 0  
By Nergis Öztürk Activities May 18, 2018 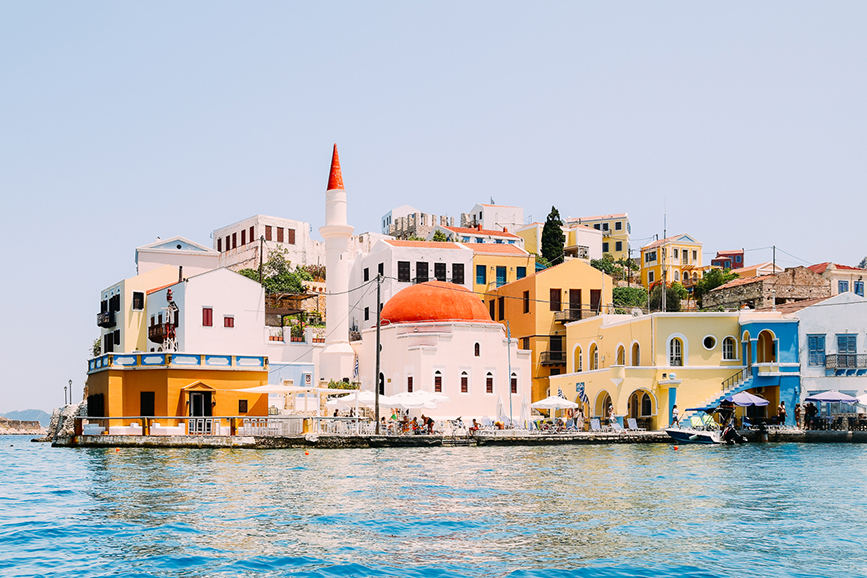 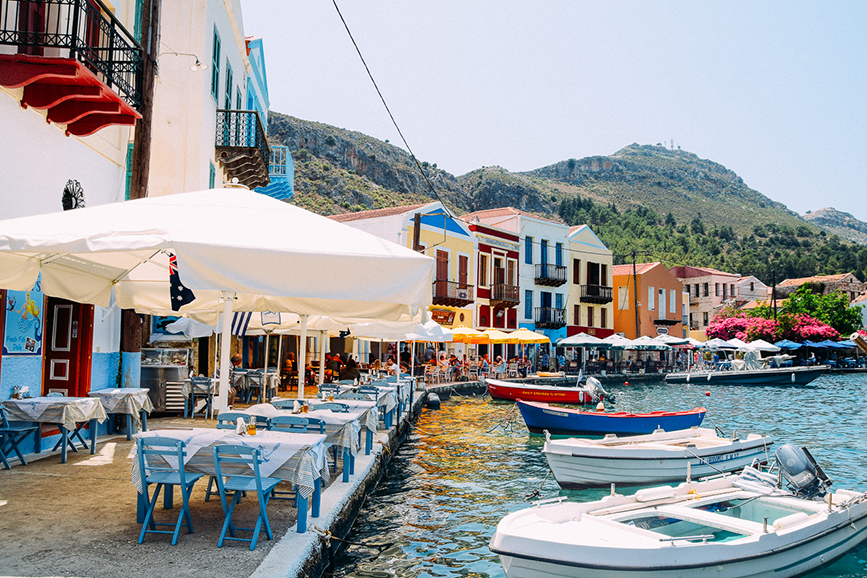 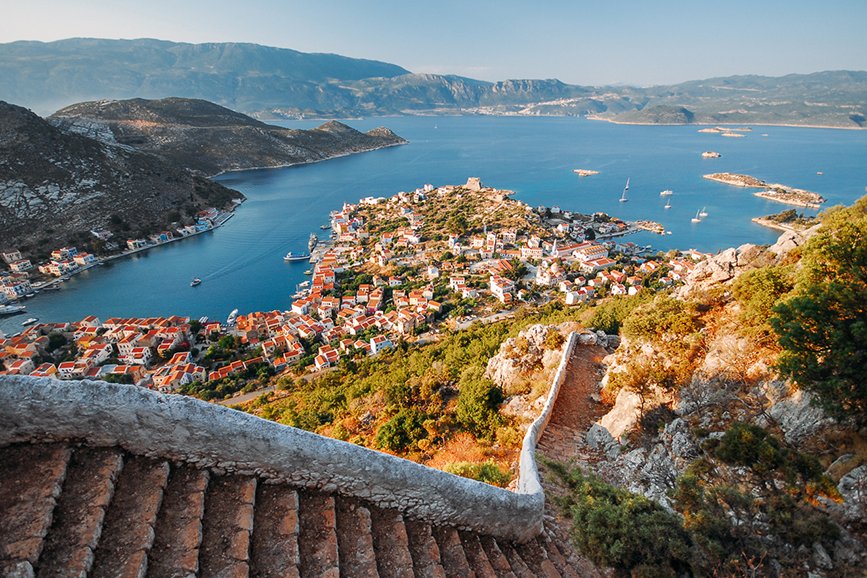 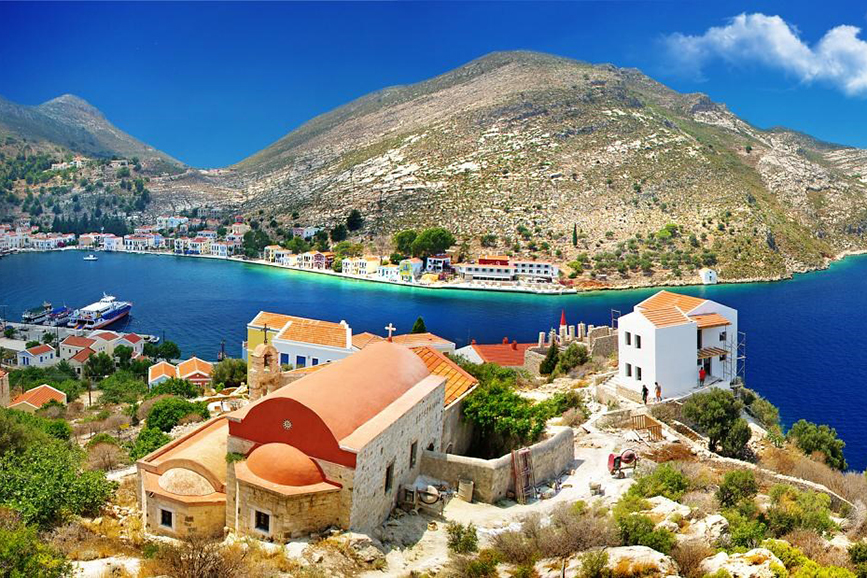 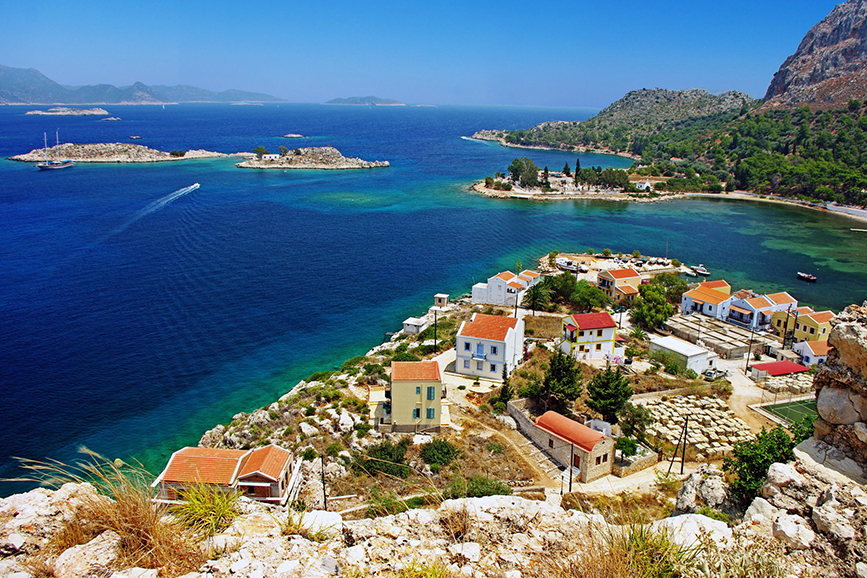 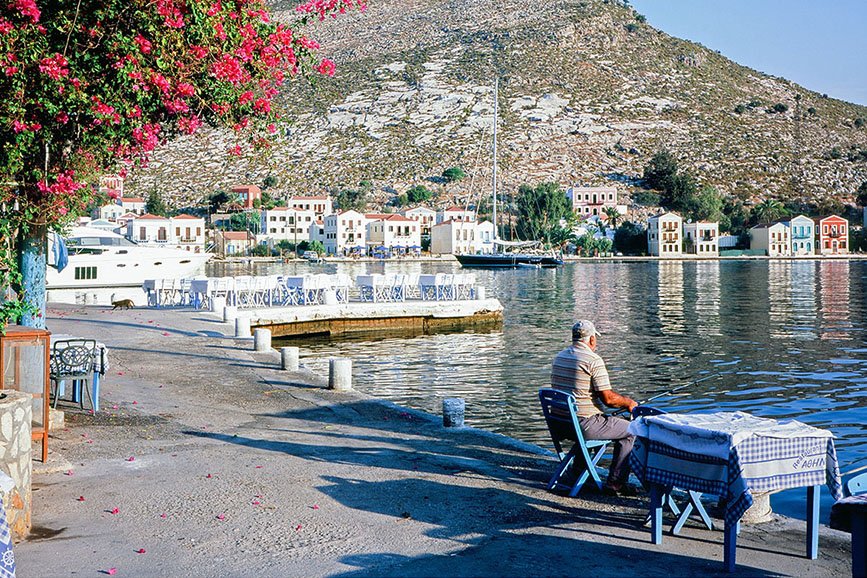 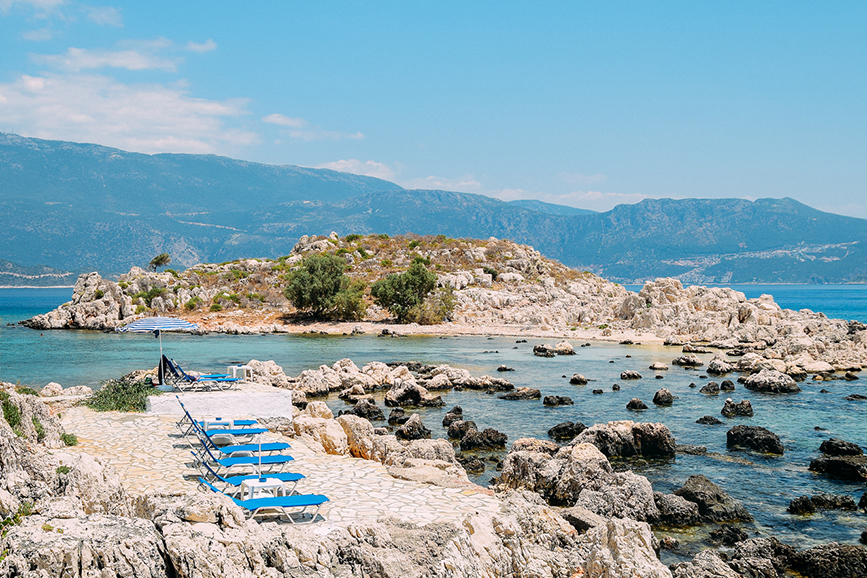 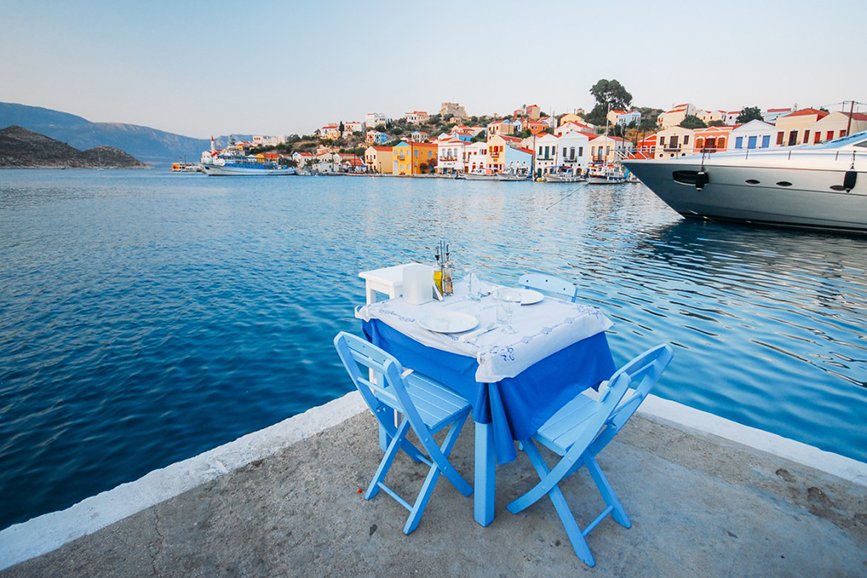 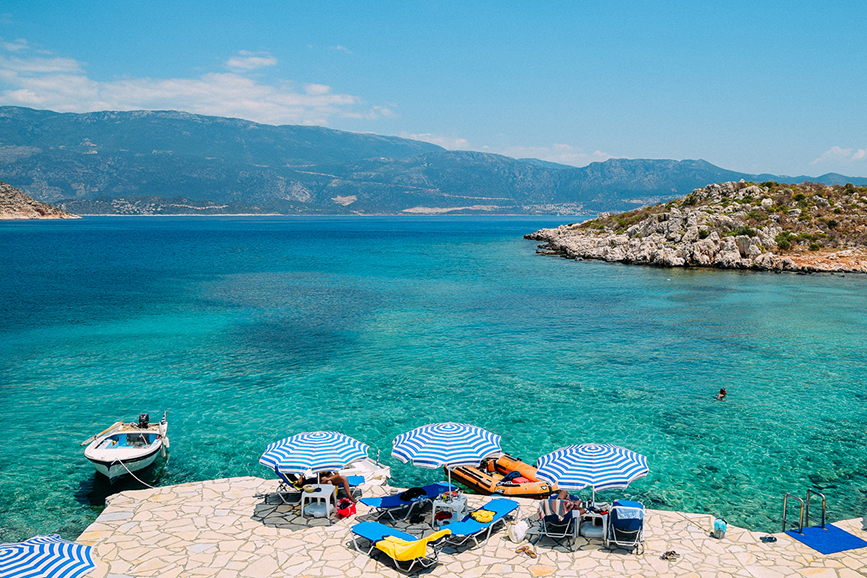 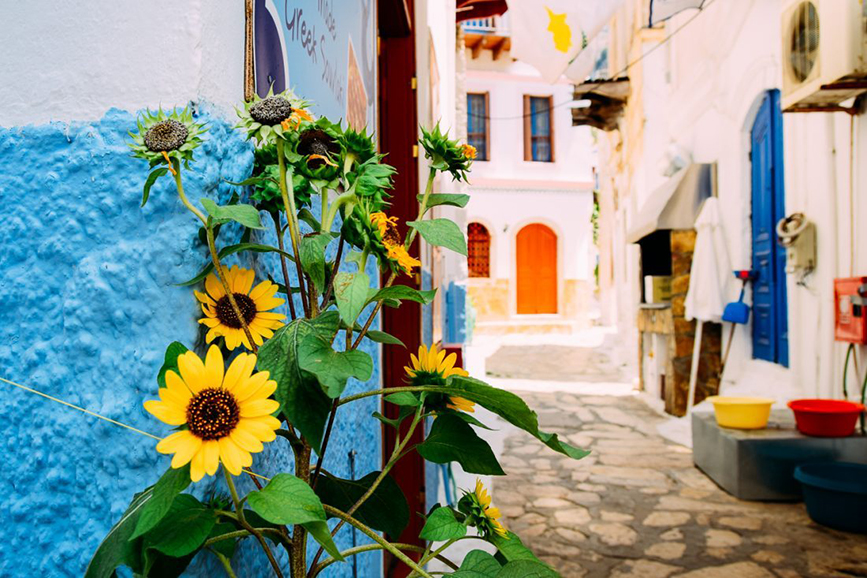 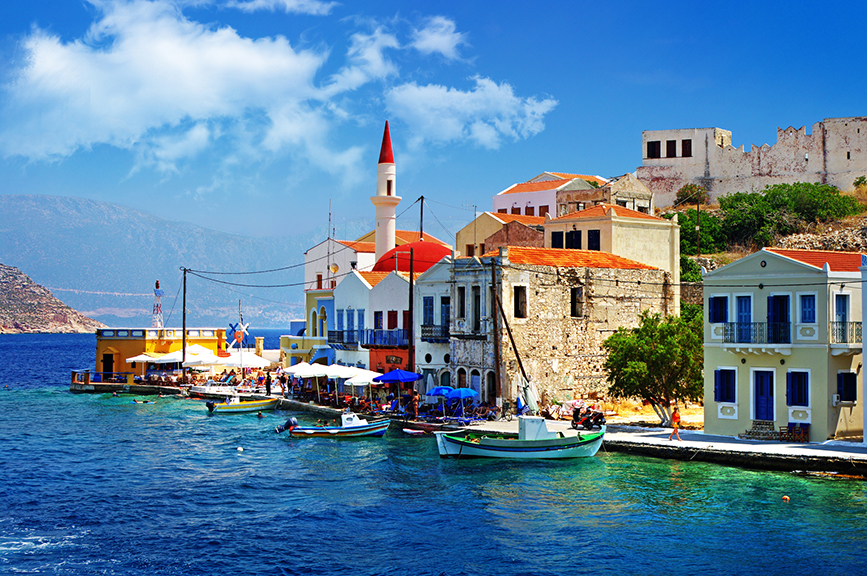 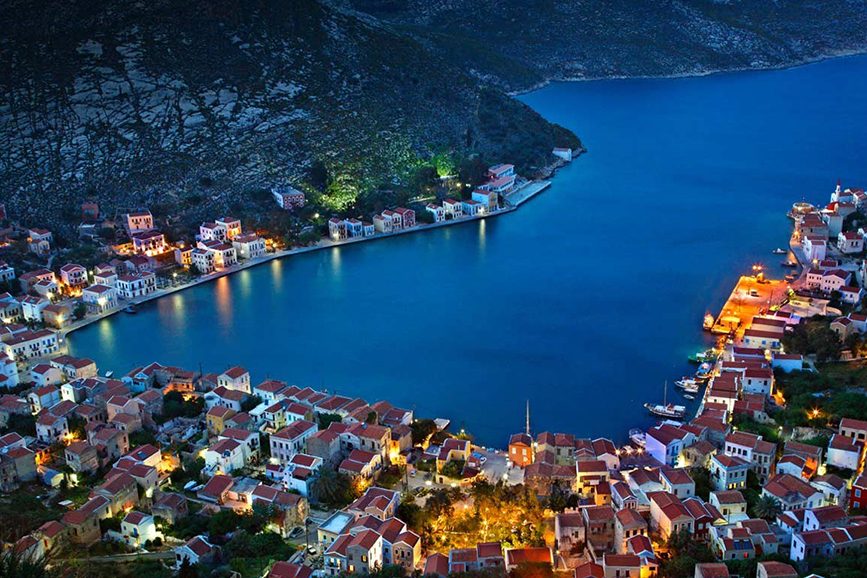 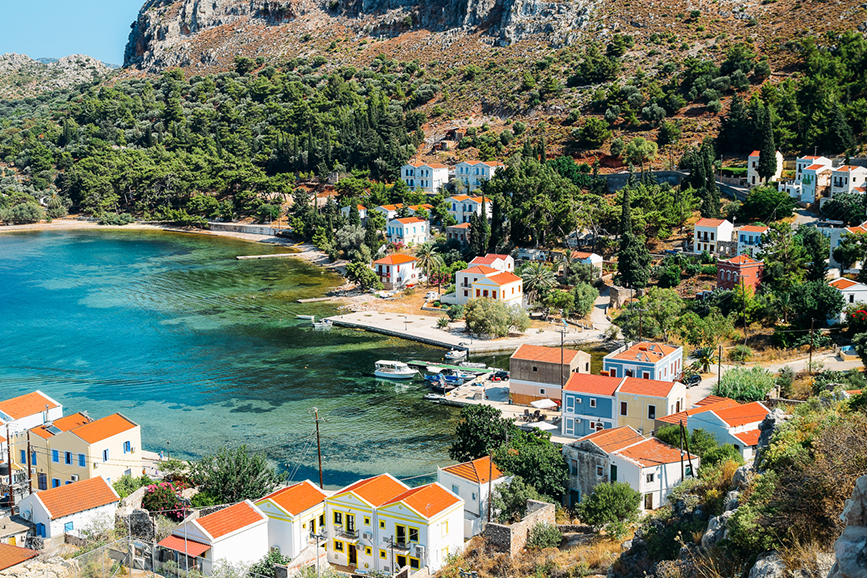 Kastellorizo is a small but magical Greek island. It resembles a movie set, one that has been created by painting mock-up houses made from match sticks. Just one street behind the ornate houses and restaurants on the seaside, away from the tourism, there is  ongoing local life, where Greek aunties sit at their front porches. It is very sparsely populated. Streets are spic and span clean, colorful and peaceful. At the harbor, opening to narrow and eye-catching streets, you may see caretta carettas in the shining and transparent water.
.
Only 1,300 meters from our shores, Kastellorizo is one of the smallest Greek islands, with an area of only 10 sq. kms. The island, which once had a population of 16,000, has only 500 people living there today. They make their living from tourism and fishing.
.
Kastellorizo has reached worldwide fame after the the Best Foreign Movie Award winner Mediterraneo was shot at the island in 1991 by Gabriele Salvatore, one of the leading directors in Italy. The setting of the movie takes place during the Second World War. A handful of Italian soldiers sent to the island, landed with a great  fear of not knowing what is waiting for them. Yet the surroundings looked peaceful. After an initial shock, the Italians began enjoying the island. When the Greeks noticed no hostility from the arriving bunch, they started to emerge from  their hideouts. Life began to go on as if there was not a terrible  war happening around the globe. When you go to the island, make sure you see Chorafia neighborhood. A big chunk of the movie was shot here. Sit at Cafe Mediterraneo for some fresh air, which gets its name from the movie, and enjoy the magical ambience created by the magnificent Mediterranean architecture.
.
The Blue Cave, where you can get to by taking a boat, costs 10 Euros per person;  St. George Island, with its alluring beach, you can get to by taking a boat which costs 5 Euros per person. The Ottoman Mosque Museum, Archeology Museum, St. John Templars Castle, Mandraki Harbor, St. George’s Church, Santrapeia School, Lycia Sepulcher from the 4th century BC, and St. George Monestary on top of the hill, are among the other places you can visit. Of course if you have a visa, you may also consider staying on the island for a day or two.
.
There are about ten restaurants along the shore. Alexandra is pricy, but it is the most luxurious, fine dining place and tops the Tripadvisor ratings. But still, Mandraki and Old Time are among the good places. We can also recommend The Seafood Taverna next to Lazerakis for tasty food at reasonable prices. Starters, salads, appetizers, fish varieties- all a mouthwatering success. If you happen to be in the neighborhood, you can drop in for a traditional Sirtaki evening here. There is also Agora on the back street with a touch of shopkeepers’ flavor, an ideal place for appetizing, local tastes at modest prices. It operates in the backyard behind the delicious wholesale fish market.
.
GETTING THERE AND VISA
There are two ferry companies operating between Kaş and Kastellorizo: Kahramanlar Tourism and Meis Express. The ferry schedules and the prices are the same; Departing at 10:00AM and returning at 4:30PM. You reach the island in twenty minutes. Round trip fare is 25 Euros. Also in July, August, and September, there is a ferry leaving at 6:00PM and returning at 11:00PM on Wednesdays and Saturdays. If you want to go in the morning and return at 11:00PM you will have to pay 5 Euros extra. If you leave your passports the day before, the ferry operators will take care of all the required passport stamping for you. You can reach the details for visa procedures at this link.
.
ACCOMMODATION
Megisti Hotel is the most comfortable and luxurious hotel at the island. It is located at the far right corner of the harbor, and you can get in the water right at the front of the hotel. In one word, the breakfast is exquisite with unlimited food, from smoked salmon to pancakes. We can also recommend Poseidon  for accommodation. The owner Yorgo put together the three houses he bought and turned them into apartments. There are boarding houses toward the island’s interior at more affordable prices. Additionally,  there are also houses which can be rented through airbnb.

In 2008, within the scope of Kaş and Lycia Culture and Art Festival, Kaş and Meis were announced “sister cities”. In addition to Mediterranean waters,  Kaş and Meis share common legends. According to the legend, the Sleeping Giant and Meis, were in love, but were separated by an earthquake. One day when the sea rises, they will wake up and unite again.